I’ve just been sorting through some of my vintage San-X Kogepan letter sets so I thought I would share some of them with you. They were released between 2000 and 2005. 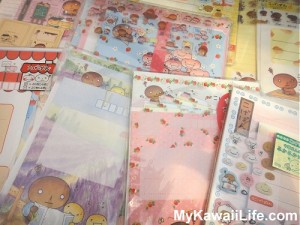 Kogepan means burnt bread. He is a character based on the Japanese bread product called anpan. Anpan is a sweet bread roll with a filling, usually red bean paste. Kogepan’s head looks like a bread roll that’s been a little overcooked. That’s probably why he never seems to smile.

Kogepan is not the only bready character. He also has lots of bread-related friends. You can see a lot of them on this letter set: 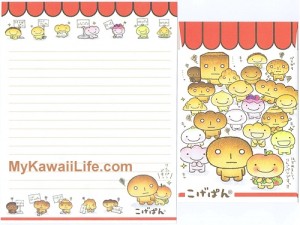 Francepan – the one with the really wide head resembling a French loaf.

Kogeshokupan – the one with the box head at the back. His name means burnt sandwich bread.

Yakisobapan – the one at the back that resembles a taco. He is fried noodles bread.

My favourite Kogepan characters are the ones that are smiling. They tend to be the light coloured characters. I guess they are happy because they aren’t burnt…lol.

My favourites include Nikuman, Curryman and Anman. They are the cute little buns that always come in a bag: 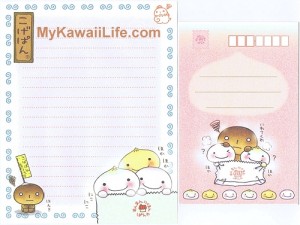 I also love Melonpan, mostly because I love melon bread, but also because I think he looks like a cute little turtle. 🙂

He’s the little green one sitting next to Kogepan in the top left corner.

Of course, these are only some of Kogepan’s friends. The designers at San-X have certainly created a cute family of characters. Do you have a favourite?