Last night I decided to try my hand at cooking, Japanese style. It wasn’t a traditional Japanese dish, but more a Japanese take on Italian pasta. I love pasta but I don’t eat it very often. I can’t eat tomato (it makes me sick) so sadly, most pasta dishes are out of bounds for me. When I do eat pasta, it’s usually carbonara, boscaiola or alfredo. Although I really enjoy them, I try not to eat them too often as the sauces are usually rather thick and creamy.

When they cook pasta in Japan, however, the sauces tend to be a lot lighter and very tasty…so I thought I would try to create something similar. And this was the result: 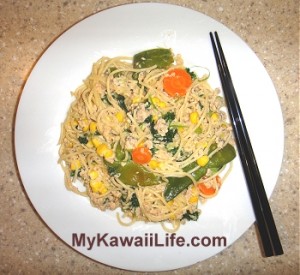 It was a big hit. Hubby loved it and I liked it so much, I ate it way too fast. 🙂

It was quite easy to make too. I based it on a recipe I found on Japan Food Addict, but I changed it quite a bit.

The first thing I did was to cook all my vegetables. I used carrot, corn, pak choy (I was going to use spinach, but my local store had run out) and snow peas.

Then, I cooked some spaghetti.

When the vegetables and pasta were ready, I heated up a big pan. I put a bit of olive oil and margarine in the pan to stop everything sticking. I then heated up some salmon and added the vegetables.

Next came the sauce. I added about 3/4 cup of light cream, ½ cup of hot water and a cube of chicken stock. I then let everything simmer, stirring occasionally. I also added parsley for extra flavouring.

When everything was almost ready, I added the pasta and stirred it thoroughly so the sauce was nicely spread. The sauce mostly evaporates, but the flavour certainly sticks…and it tastes great!

If you like pasta, I highly recommend giving this recipe a try. I will certainly be cooking it again.